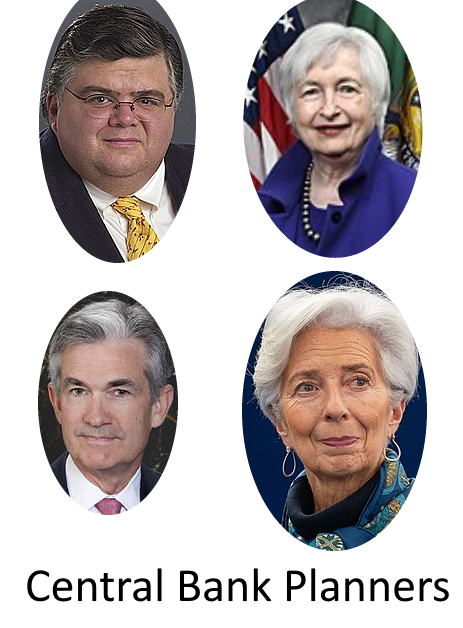 You can’t make this stuff up. Just listen to them and realize that central bank planners are full of bad ideas, narrow-minded education, obfuscations and outright lies. They want to control everything. Everything.

I’ve been wanting to write this post for a while and this last tweet I got just made me have to do it today.

Jerome Powell is the 16th chair of the Federal Reserve. This guy is Keynesian all the way. This guy has been in finance his entire life. One would think he’d be a better spokesman at the podium. Oh, but wait, here’s another gem from Jerome who wants maximum employment and price stability of 2% inflation. Nice sounding goals.

Ms Yellen is “Keynesian to her fingertips“. She also pushes the negative stereotype of Bitcoin only being used for illicit purposes.

“I fear it’s often for illicit finance,” Yellen proceeded to tell CNBC. “It’s an extremely inefficient way of conducting transactions, and the amount of energy that’s consumed in processing those transactions is staggering.”

I wish these types (J Yellen, E Warren, etc…) would get educated before spouting off. While I try not to fall down the conspiracy theory trapdoor, it does make one think that the central bankers are protecting their own self-interests by bashing bitcoin.

The IMF Blog – here’s a central bank blog crying about cryptoassets as legal tender and provides weak arguments as to why it’s a bad thing. Every argument posted by this blog has a logical counter argument. They intentionally are posting FUD (fear, uncertainty, doubt) against crypto for those that are uneducated in how crypto works (and specifically bitcoin).

Agustin Carstens – General Manager of the Bank for International Settlements. This clip is pure gold and proof of the want of central bank planners to control EVERY facet of your financial lives.

We don’t know, for example, who’s using a $100 bill today …. the key difference with the CBDC, the central bank will have absolute control on the rules and regulations that will determine the use …. and will have the technology to enforce that… a huge difference to what cash is.

Holy shit. Eye opener if you have ever needed one on advocating against central banks and CBDC’s. This isn’t conspiracy. It’s real.

Let’s Fix This System By Replacing It

Fractional Reserve is a broken system and has been replaced/reset/’taken a mulligan’ in the US at least three major times in its history. This is a good read on the Fed…
https://www.forbes.com/sites/markhendrickson/2013/12/20/100-years-later-the-federal-reserve-has-failed-at-everything-its-tried/?sh=69db82622a60

Look at the following graphic and see how an inflationary fiat has performed (poorly) against bitcoin over 13 years.

What’s the answer? How do we fix this broken system? Buy and hold #bitcoin. Opt out of the fiat system as much as possible. As the Bitcoin ecosystem grows, you will find more and more options for utilizing it on a daily basis. Using bitcoin for fiat loans is just the beginning. But buy as much bitcoin as you can afford regularly so you will have it available for use when you have the need. It will grow in value that you can then use for your needs.

I also advocate using it for day to day purchases to grow the payment network with the caveat that you immediately replace what you bought with more bitcoin put back in your wallet. You have to build your own bitcoin liquidity unless you get paid in bitcoin now.